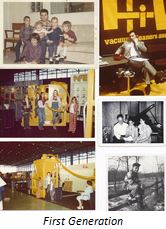 The DeMarco Family has been the leading patented innovator in industrial vacuum technology since 1968, but it wasn’t until recently that the vacuum line’s name reflected its inventor, Thomas DeMarco Sr. The current DEMARCO® Vacuum Line is the third generation of industrial vacuums from the DeMarco Family. Each generation of vacuums improved the wet/dry material collection process as the company has always been dedicated to providing their customers with high performance and superior quality products. 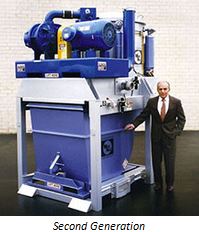 MAX VAC® was the second generation of industrial vacuums from the DeMarco Family. The line was launched in 1986 and revolutionized the vacuum industry with the addition of the Patented DEMARCO® 3-Stage, 2-Compartment Laterally Offset Cyclonic Material Separator Circuit and DEMARCO® Silencer Base® Muffler. The vacuums also implemented the pleated cartridge filter technology for the first time in the industry, an additional feature that enhanced the vacuum’s overall performance and simplicity of design. Overnight, the bag-type vacuum filter became obsolete. 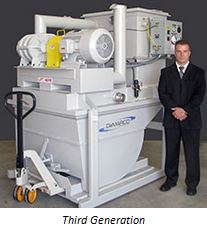 Committing to his father’s innovative spirit, Thomas DeMarco Jr., President and Senior Engineer, improved and enhanced their industrial vacuum line again in 2010. This latest design has more advanced performance features including greater filter efficiency and improved filter air-to-cloth ratio, as well as a new aesthetic low-profile and exclusive compact design. In addition to these new developments, the line was also renamed DEMARCO®. The new vacuum name honors the company’s founder, Thomas DeMarco Sr., the industry pioneer who dedicated his life to the continual improvement of vacuum system technology.

Today, the DeMarco Family, now in its third generation of vacuum engineers, continues to be the innovative leader in the development of superior vacuum designs worldwide.

The DEMARCO® Vacuum can also be customized to work in a wide variety of material collection applications. To learn more, visit the Technology and Performance page today. DEMARCO® – Vacuums Built for Industry™

Did you know that for more than 45 years, DEMARCO Vacuums has been a groundbreaking pioneer in the field of advanced vacuuming technology? It’s true.

Founded by inventor and industrialist, Thomas M. DeMarco, DEMARCO Vacuums holds numerous US, Canadian and other foreign patents related to vacuum technologies. More than just an industrial vacuum systems manufacturer, DEMARCO holds more patents than any other competitor in the industry—and this innovative spirit continues today.

DeMarco Industrial Vacuum Corporation continues its tradition of high quality manufacturing today with new and exciting innovations. Their team of skilled Engineers is ready to serve you. Contact DEMARCO Vacuums today to learn more about their products, services and capabilities. 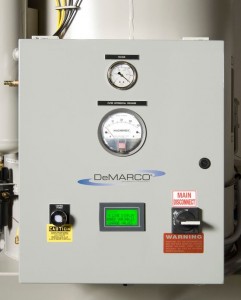 DEMARCO® has introduced unmatched patented technology which has lead the industrial vacuum systems industry for over four decades. DEMARCO’s Portable Industrial Vacuum Line features a new low profile compact design as well as an exclusive 3-Stage, Two Compartment Material Separation Cyclonic Circuit and the DEMARCO® Silencer Base® Muffler. Built for extremely heavy-duty applications for both indoor and outdoor usage, DEMARCO’s portable vacuums range from 15 HP to 250 HP. These systems will collect nearly any wet/dry materials – from the heaviest, most abrasive to the finest of powders – without interruption.

DEMARCO’s Competitor vacuums have their material separators located directly under their filter compartment resulting in:

Additional options for our Portable DEMARCO® vacuums include over-the-road trailer mounted or in-plant towable packages. Even more, this vacuum line can be connected to a central manifold system with multiple pick-up point connections allowing multiple users simultaneously for even faster cleanups.

The health and safety issue of combustible dusts reached its apex back in 2009, when the Occupational Safety & Health Administration (OSHA) released their National Emphasis Program NEP on combustible dust. The NEP was released in order to focus attention on the agency’s efforts to mitigate dust-related explosions. Part of the NEP standard 1910.307(b) posted stipulations about the use of electric industrial vacuums in areas where combustible dust accumulates. This standard is defined by NFPA 70 from the National Electrical Code.

For more information on industrial vacuum filters, including how to select the right media for the material you are picking up, please contact us or visit the DEMARCO Vacuum Accessories page.

These industrial vacuums should include vacuum features such as motor, switches, filters, and inner chambers that are designed specifically for use in combustible dust applications or situations. In addition, an explosion proof vacuum should have a graduated filtration system that traps and keeps the combustible dust particles from moving out of the equipment back into the air. A HEPA filter is most often used in order to clean the exhaust of the vacuum. High quality HEPA filters provide a strong defense for prevention of small dust particles escaping back out into the air.

For companies that must regularly handle the removal of combustible dust, an explosion proof industrial vacuum is a smart investment. Before purchasing, however, research is a must – ensuring the right machine is matched to each specific situation. When matched properly, the right machine can be matched to the needs of the company in question, ensuring proper plant safety. 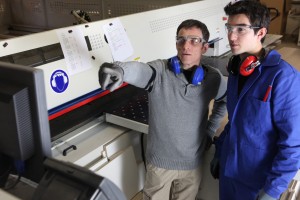